In the summer of 2018, my parents retired, sold their house, traded their cars in for a minivan, packed it full of camping gear, and set off to explore the National Parks of the Western USA. They spent months driving from park to park, enjoying their newly found freedom, and admiring the vast and beautiful landscapes. Not long into their trip, they began to be chased by clouds of smoke from wildfires. They were evacuated from several parks and had to drive hundreds of miles to avoid the smoky haze. There were so many fires raging, and the smoke was so thick, that they had to head for the safety of the coast.

With all my commissioned works, I want the music to be unique and personal to the organization that commissions it. Countless residents of Oregon and the Western USA have felt the impact of recent wildfires – losing trees, homes, and loved ones (not to mention the larger ecological costs). “World on Fire” seeks to envelop the listener in the sounds of a raging wildfire and its aftermath and bring awareness to the severity of our destructive lifestyle.

“World on Fire” opens with two melodic themes that recur throughout: 1. an ascending Lydian scale (a major scale with a raised fourth scale degree) and 2. the “forest” theme, first stated in the horns and cellos. The sweeping lines of the opening soar over a mountain scene, flying above the trees, until an electrical burst sparks a fire that slowly grows and consumes the forest. I’ve employed a non-traditional “fire” effect with the crinkling of paper, as well as raw, cacophonous blasts from the orchestra. As the fire dies, the English horn, bassoon, harp, and strings (instruments made of mostly wood) weep for the loss of life as the embers crackle. The music descends in falling gestures until it arrives in the lowest and darkest colors of the strings. Flashes of lightning in the distance and the gradual return of the ascending scale give way to a full-on rainstorm – nature’s attempt to reclaim and repair the destruction.

“I am so grateful to Elizabeth and Justus Schlichting, James Paul, and the Oregon Coast Music Festival for making this commission possible. May “World on Fire” remind us of our vital responsibility to protect the earth for generations to come.

Composer Jake Runestad has developed a versatile and prolific career creating works for orchestra, wind band, chorus, chamber ensembles, and opera and holds a master’s degree in composition from the Peabody Conservatory of the Johns Hopkins University where he studied with Pulitzer Prize winning composer Kevin Puts. He also studied extensively with acclaimed composer Libby Larsen. A native of Rockford, IL, Mr. Runestad is currently based in Minneapolis, MN and his music is published by JR Music.

When asked about this project, Maestro Runestad replied, “I am thrilled to be writing a new orchestral work in honor of James Paul and his tenure with the Oregon Coast Music Festival. It is a great joy to celebrate this esteemed conductor and ensemble through music, and I look forward to being in Coos Bay for the premiere.”

Elizabeth and Justus Schlichting were introduced to Maestro James Paul by mutual friends nearly 20 years ago. They have loved attending his concerts ever since, especially those at the Oregon Coast Music Festival. In June of 2016, while celebrating the Maestro’s Silver Anniversary as Music Director of the Festival, they proposed the idea of commissioning a new composition for the Festival in his honor. James suggested Jake Runestad compose the piece, as James had collaborated successfully with Jake previously.

Since retiring in 2012, the Schlichtings have devoted their time and resources to commissioning new classical music. They believe that new works are essential for the vitality of the art. Even Beethoven’s masterpieces were new music once! Their commissioning experiences have been so rewarding that they encourage everyone who loves classical music to join in the joy of commissioning new works and attending concerts with new music. The Schlichtings hail from Laguna Beach California and support Wild Up (an LA based new music collective), New Music USA, The American Composers Orchestra, and the American Composers Forum. 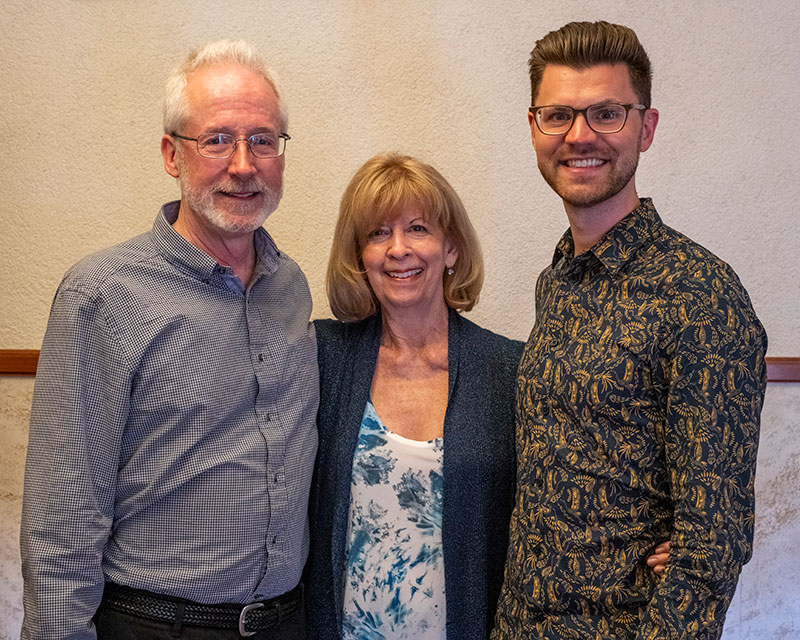